Piers Kennedy playing his compositions on the piano

The College was very pleased to hold a special event in commemoration of what would have been the 70th birthday of Dr Hélène La Rue, late St Cross Fellow in Music, together with a La Rue Scholarship Dinner afterwards. The two current La Rue Scholars, Piers Kennedy (DPhil in Music, 2019) and Till Stehr (MPhil in Music (Musicology), 2020) presented aspects of their research in the Hall before dinner.

Piers Kennedy performed three of his own compositions (with vocal melodies sung by Elizabeth Nurse), which reflected two main strands of his research output - improvisation and neo-historicalism. The first piece, "A Short Story of Falling", was a 2020 commission from the Choir of St John's College, Cambridge for treble solo and piano. This sets the opening poem from the 2016 collection "Falling Awake" by Oxford's Professor of Poetry, Alice Oswald and comprises an improvised piano part imitating the pattern of rainfall around sweeping lyrical vocal melodies.

The second and third pieces were both realisations of Elizabethan lute songs from an edition made in 1968 by, amongst others, W H Auden - Thomas Campian's "Follow Your Saint" and John Attey's "Sweet was the Song". These two pieces were written in homage to the beauty of their craft and feature accompaniments which both preserve and addle the musical traditions of their genesis. 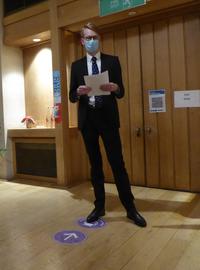 Till Stehr giving a presentation on his research

Till Stehr gave a presentation on one of his research projects in which he discussed gendered ideas in medieval and renaissance music theory, specifically in the descriptions of mode characters. He explained that those often highly repetitive connections between music in a certain “mode” and the emotions it evokes proved to be a welcome source for gendered ideas of emotional and music history with remarkable stability of gendered images over time.

Till concluded that the eightfold modal system as a carrier for primary binarily structured gender knowledge was an interesting outcome of this centuries-long process of theory writing and copying.

Following these performances and presentation, the guests who included Hélène's family and close colleagues enjoyed many reminiscences about Hélène over dinner in a fitting tribute to her posthumous 70th birthday.